Emilie was born on the 12th September 1797, the eldest child and only girl in a family of four. From an early age this bright and lively daughter of Baron and Madame de Vialar felt attracted to the things of God.

Her childhood was a happy one. Her mother was her first teacher, though she also frequented a local school. At thirteen she was accompanied by her parents to a boarding school in Paris but sadly while she was in Paris her mother died unexpectedly. 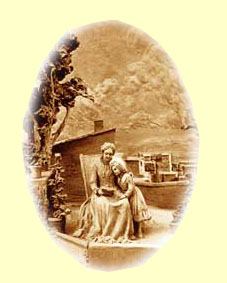 Having completed her education and returned home, Emilie frequently accompanied her father to social functions in Gaillac and surrounding areas. Young and beautiful, she delighted in fashionable clothing and jewellery; she had many friends of her own age and soon she received proposals for marriage.

In her writings, Emilie tells us that at this point she began to realize that she had a different vocation in life, but she was not sure what this would entail. Though everything interested her, she seemed to find no real fulfilment in anything. A mission which was preached in her parish helped her decide that ‘her life would belong totally to God’. But what that meant in practice would not become clear for several years to come.

In the meantime Emilie became aware of the poverty and injustice surrounding her in her own home town. Much to her father’s displeasure she began to distribute food and clothing to the poor who flocked to her door. Later, and with the help of other local girls, she was able to extend this service to the poor sick in their own homes, bringing them hot soup, warm clothes, food and medicines.

In her searching, Emilie was helped by a spiritual director who encouraged her to believe in her vocation. Gradually she realized that God was inviting her to found a Religious Congregation to honour the Mystery of the Incarnation as revealed to St Joseph. Her grandfather’s death left her with the wherewithal to purchase a house, and with three companions she founded the Congregation on Christmas eve 1832. 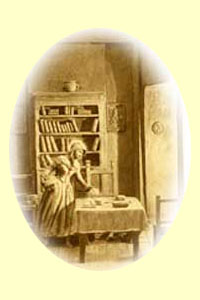 In June 1856 Mother de Vialar had left Paris and her family there for the last time. Seeing her always so active, her Sisters were under the illusion that they yet would enjoy her for many years to come. Nevertheless, she would not see the close of the year. On the 22nd August she was attacked by excruciating pain. There was consternation and anxiety all around her. The doctor pronounced his diagnosis. ‘Strangulated hernia …’ a complaint which lacked the remedies of modern surgery. The roots can be traced back to the occasion when Emilie, in the service of her poor, carried a sack of grain which was much too heavy for her. In consequence, she suffered all her life but never a word of complaint did she utter! The doctors had no illusions regarding her state and on the 23rd August she received the Last Sacraments. Her daughters were thoroughly alarmed, quite unable to face the possibility of her being taken from them. Next day, the 24th August 1856, surrounded by her weeping daughters, in profound peace, Emilie went to meet the Lord, whom she had loved and served so faithfully all her life.

All over Marseilles the whisper went forth from mouth to mouth. ‘The saint is dead.’ The Sisters were literally shattered by the sudden blow! For a time, they were completely demoralized. No one had anticipated that the Foundress would be taken away from them so soon. She still appeared so necessary to the Congregation! However, they soon recovered from the initial shock. They went to consult the Curé of Ars, whose reputation for sanctity was now widespread. The Curé of Ars fixed on the Sisters his penetrating gaze and said to them:

“Not only will your Congregation not flounder,
but it will spread over the world ….
One day your Foundress will be raised
to the altars.”

What a wonderful prospect! At the word of a Saint, the thought of the future canonization of their Foundress filled the hearts of these Sisters with renewed hope. The growth of the Congregation continued rapidly, which was a proof of the power Mother Emilie wielded in Heaven.

Before her death, Emilie herself had founded forty-two houses. Since Emilie’s departure for Heaven, how many petitions have been raised to her from all over the world! And she continues to answer with the outstanding generosity that characterized her on earth. Miracles have been attributed to her intercession and this has permitted the Church to inscribe her name on the official list of canonized Saints. Emilie de Vialar was beatified in 1939 and canonized by Pope Pius XII on the 24th of June 1951.

A new Saint was born
for the glory of her daughters
and the universal Church.

The Sisters of St. Joseph of the Apparition are now scattered over the world. In accordance with the wishes of their Foundress, they undertake all the varied works of Charity which are to be found in all the existing Orders … schools, orphanages and colleges, the care of the sick – in hospitals and domicile – parochial works, rest-houses, the apostolate of the prison, social services, the Sisters stop at nothing!

As did the pioneer Sisters, embarking in Algeria in the early years of the Congregation, the Sisters of St. Joseph still devote themselves to Jews, Moslems, Buddhists and so forth, with true Christian Charity.

‘Devotedness unto death’ is the motto left to them by their Foundress and they do their best to live it. Epidemics, civil wars, revolutions … every emergency finds them undauntedly at their posts! Moreover, the life they lead is the surest testimony of their Faith and Charity. After God, the Sisters know from whom they derive their courage and fidelity!